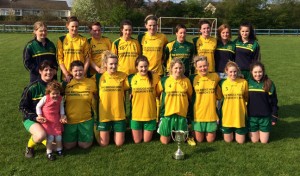 A glorious weekend for the club with the ladies completing the Premier division double when they added the Premier cup to the league title they already won. All roads lead to Clounreask next Sunday when they attempt to achieve an unprecedented triple with Abbeyfeale United their opponents in the Desmond Ladies cup final.

Then on Monday the U10 girls retained their league title with a 6-0 win at Kildimo to ensure that the title remained in Ballingarry.