On Saturday the 24th of September 2022 a large group of Hibernian FC supporters gathered in Ballingarry to commemorate the birthplace of Canon Edward Joseph Hannan a founding member of the famous Scottish football club Hibernian FC. Eddie Houlihan was MC for the day and firstly got John Cronin and Dougie McLeod to unveil the historic Hibernian Harp mosaic. Fr. Tom Carroll the blessed the structure and said a few words of welcome to our Scottish visitors. David Hanlon Ballingarry AFC chairman then officially welcomed the St. Patrick’s supporters club for Edinburgh to Ballingarry AFC’s ground “The Paddocks” Dougie McLeod of St. Patrick’s supporters club then spoke about the history of the Harp and it’s connection to Ireland and the Cowgate area of Edinburgh. John Cronin then delivered an address giving the history of Canon Hannan in Ireland before going to Scotland.  Stephen Dunn Hibernian FC director then spoke on behalf of the club and said he would like to build on the links between Ballingarry AFC and Hibernian FC in the future. When the speeches were over and “Sunshine on Leith” was played loudly over the speakers, a few tears were visible on the visitors faces. A great occasion for the community of Ballingarry and when the bus left the village later that night, everyone knew they had been involved in something special. 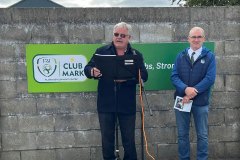 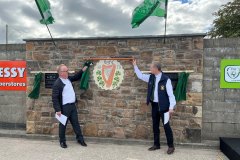 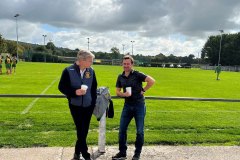 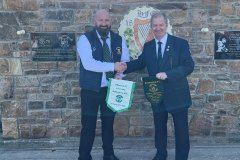 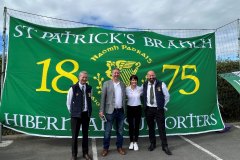 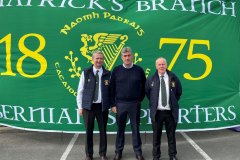 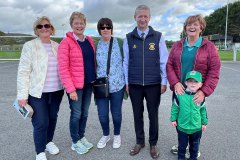 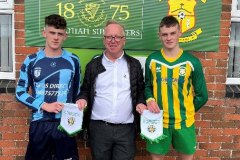 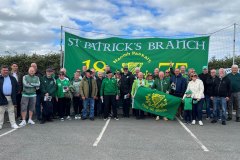 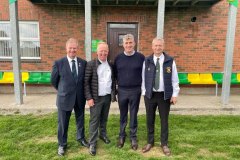 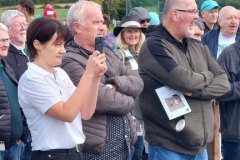 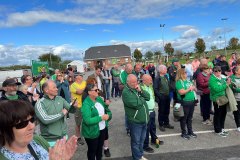 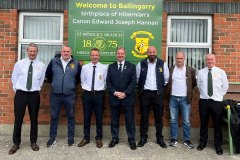 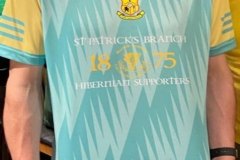 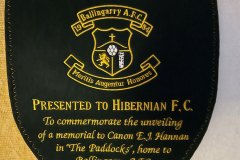 “Good afternoon and welcome to the home of Ballingarry AFC
This journey for me started on the 27th of February 2019 with an email to our website from St. Pat’s members Dougie McLeod & Brian Duffy. From this a dialogue started via email. By August of the same year myself and my wife Alice were in Edinburgh being given a tour of Grange cemetery and Easter Road by St. Pat’s members.
From this initial meeting we established mutual goals and quickly formed a good working and personal relationship which has lasted ever since. As emails flowed over the next few months, we agreed to host the St. Pat’s working committee in Ballingarry for a weekend trip in January 2020. This cemented our commitment to commemorating Canon Hannan in Ballingarry AFC grounds. The Pandemic slowed our progress, but where there’s a willingness to succeed there is always a way to achieve it.
So, from there James Clancy and myself started to research a man we knew very little about regarding his time in Ireland. Local relative Tom Burke was our first call, and his knowledge was an invaluable starting point for us and I am very grateful to Tom for this. From there we gradually got in touch with more and more people with an interest in the history of the Canon’s family. One of these is a Hibs supporter Michael Hennessy who has been very generous with his time and research, whether we see a book from Mike is yet to be determined but he certainly has enough raw material for one. And I’d like to take this opportunity to thank him for all his help.
So, who was Edward Joseph Hannan?
Edward was a farmer’s son from Ballingarry. Born in Ballygrennan on the 21st of June 1836. His parents were John Hannan and Johanna Sheehy. His is fascinating journey, one of 11 siblings that we know of, Edward was the second oldest and likely bound for the priesthood from an early age. Half of the siblings would emigrate to Australia, and he and his brother Joseph, 17 years his junior, would enter the priesthood and emigrate to Scotland to support the massive growth in the Catholic population in the aftermath of the Famine. The remainder of the family stayed in these parts and there are still a few of Hannan’s descendants living here, some of whom are present with us today.
Ballingarry parish in the 1830’s was a thriving community of some 8600 people, roughly 7000 of whom lived on the land with 1600 living in the town. Difficult to imagine today.
Brought up on a farm, Edward would have been expected to help with domestic tasks like milking, fetching water, looking after the younger children, before going to the local primary school on foot or by horse and cart. As a teenager, he would have witnessed the misery of the famine as the wretched and starving leaving the Cox estate in Ballynoe, would have had to pass his front door on the way to the commonage land of Knockfeirna hill.  The parish of Ballingarry was particularly affected by the Famine, losing half its population to starvation and emigration. Edward would have known many of the dead and emigrants through church and school.
The big influences on him at that time would have been his father, John, a figure in the community, and his parish priest, Michael Fitzgerald, whose words you can read today on the Knockfeirna Famine memorial.
In 1853, aged 17, Edward attended the newly opened junior seminary of St Munchin’s in Limerick city where his academic results were outstanding, making him a prime candidate for further education and the priesthood. That he chose the tough missionary route via All Hallows College in Dublin rather than the secular route via the more popular Maynooth College in Kildare was likely a result of the influence of two other local clergymen, his neighbour Ed Noonan from Ballyelan, and his sister’s future brother in law, William Hallinan of Bealduvroga (Fort William), both of whom preceded him at All Hallows and became senior figures in the Catholic Church in the West of Scotland.
He entered All Hallows, aged 19, and after 6 years at the college, arrived in Edinburgh in the autumn of 1861, where after a brief stay at the cathedral, he became a curate at St Pat’s Church where he would spend the next 30 years serving the local community.
The next two speakers are both far more qualified than me to talk about Canon Hannan’s time in Scotland, so I will leave it up to Stephen and Dougie to fill you all in on that part of his life.
Finally, I would like to thank the following firstly our stonemason Tom Lynch who done an excellent job in the facing off of the wall surrounding the mosaic. Secondly the St. Pat’s committee for all their help and generosity in donating the Harp mosaic to the local community, namely the St. Pat’s scouting team which consisted of – Dougie McLeod, Stuart McLeod, Brian Duffy, Willie Wilson & Paddy Power.
Thirdly our own club committee who left us wanting for nothing on this project.

And indeed everyone who turned up here today to mark this occasion and at last recognize one of our own Edward Joseph Hannan.”