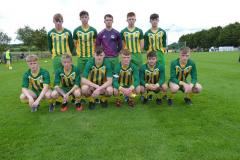 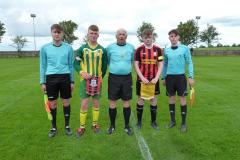 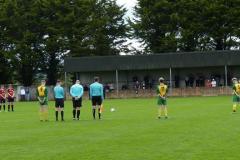 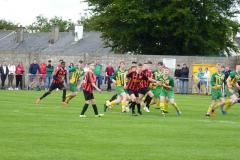 A glorious Summer’s day at The Paddocks brought a glorious result for Ballingarry as the Green and Gold Munster youth cup dream lives on with the final now awaiting Ballingarry.
It was the Desmond Leagues very own Super Sunday with three clubs involved in colossal Munster collisions but it was Ballingarry alone who came through to carry the leagues standard to the next stage and what an occasion it promises to be when they face Villa FC of Waterford for the opportunity to become the first Desmond District Leagues Munster youth cup winners.
Saturday August 15th is a date for your diary when no doubt the final venue will be awash with Green and Gold.
It really was a fine game of football between two very evenly matched sides and while the scoreline rightly suggests a tight fought game Ballingarry were deserving winners as they forged the better chances with trojan performances in all departments. The only goal of the game was scored within the opening five minutes, Bridge could have went ahead when Leon Daly, the smallest but one on the best players on show, with brilliant trickery beat Tierney on the wing to cross where Maxwell forced a fine save from Molloy from a diving header, Molloy’s quick thinking put Reece Kelly away down the left to find Mike Molloy thirty five yards out form goal, spotting the keeper off his line he sent a truly magnificent effort sailing over the stranded Fitzpatrick’s head for a wonder goal. He was 35 yards from goal just four minutes had gone on the click. The battle evolved from here and a real game resulted.
Twelve minutes in United had an opportunity when Tagney, who was a Herculean captain throughout, fouled Kirkland but the free from Maxwell was well wide .A glorious chance fell United’s way though after fifteen minutes when Dube’s neat cross from the right found Evan O Callaghan unmarked sixteen yards out but he volleyed just over. It was a lucky escape for Ballingarry.
Ballyingarry had forced a number of early corners before the visitors got their first on 22 minutes but is proved an easy save from Molloy in goal who it must be said had an easy game throughout not being forced into any serious save although there was one scary moment in the final minute of the game when he tried to find Geary with a quick clearance only for the ball to strike his own player to rebound back into the box, he recovered well and a lesson no doubt learned.
The game was at this point a fast flowing even affair and while Bridge did have slightly more possession Ballingarry were always comfortable with their defence of Tierney, Tagney, Storin and Kelly giving a masterclass in defending, with the two full backs dynamic when attacking. Ballingarry went close to doubling their lead fifteen minutes form the break when following a foul on Madigan, Quill delivered for Molloy to head over. Just before that a lightening break through Casey saw the mid fielder cross from right to left for tireless Geary to shoot wide.
United saw O Callaghan send a long-range effort well over just before the centre half, Storm Devanney, made a tremendous run form his own half but shadowed by Quill all the way ran the ball out, typical marvelous work for Quill. The half ended with the winners on the attack when Geary’s corner came to nothing.
The second half was barely in progress when United s Dube, following a deft turn, worked Molloy in goal with the resultant corner fruitless.
Five minutes into the half came one of the highlights of the game. Molloy’s magic down left channel left Bridge captain Kelly stranded Molloy’s cross had the keeper all at sea and when Casey turned the ball back across the box it seemed the inrushing Adam Hickey must score but somehow left back Luke Shea threw himself at the ball for a an unbelievable block. It was the type of moment that could and probably should have inspired those around him.
Three corners in quick succession in the 60th minute should have yielded Ballingarry their insurance with the ball skimming the post from both Casey and Tagney.
Casey was again in the thick of things with a brave block nineteen minutes from time before Geary shot wide when well placed. Casey again could have done better when Madigan’s driven cross from the left found him arriving but again Shea was there to deny Ballingarry. United unloaded the bench as the game neared its end but to no avail and when the final whistle sounded it signaled scenes of real celebration for the Green and Gold.
Another tremendous performance from this Ballingarry side following on from the heroics in Cork in the quarter final. Well drilled, well prepared with a desire to win a competition and a belief that some in our league believe can be done. Credit to Dean and John Clancy for the professional approach and Shane Markhan and Mike Boyle for the help over the past few weeks.
The final beckons for Ballingarry, has there ever been a bigger sporting occasion for a club from The Garden Town, 36 years the Club has been waiting for a day like this, it has finally arrived.
Come on You Boys in Green and Gold. (COYBIG&G.)
Ballingarry AFC: Jack Molloy; TJ Tierney; Kieran Tagney (capt); Reece Kelly; Kieran Storin; Josh Quill; Darragh Cassey; Adam Hickey; David Geary; Mike Molloy; Lee Madigan.
Unused subs: Mick Lawlor; Mark Ruddle; Brian Sheehy; Cathal McMahon; Nessan Leahy; Cian McGoey.
Bridge United: Will Fitzpartrick; Leon Kelly (capt); Luke Shea; Liam Buckley; Storm Devanney; Kyle Walker (Adam O Sullivan 65 mins); Tharbsio Dube (Eli O Sullivan 88 mins); Scott Kirkland; Conor Maxwell; Leon Daly; Evan O Callaghan (O Lionain 53 mins).
Unused subs: Michael Carey; James Egan; Coby McDonald; Conor Morey.
Referee: John McNamara.