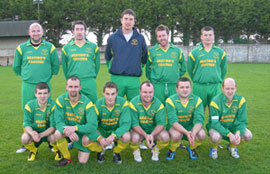 The B team (pictured left) bowed out of the provincial competition at the first hurdle on Sunday. David O’Hanlons second goal of the season gave them a half time lead but Itas equalizer in the second period sent the game to extra time where the visitors progressed to meet Rathkeale.

The 8s came up against a much stronger Adare side which was reflected in the 6-0 scoreline even if the homeside played well.

On Saturday the 12s registered their third league win on the trot with a hard earned 1-0 success at Abbeyfeale. Darragh Rankin-Hehirs goal after fifteen minutes of the game proved decisive as they kept in line to retain the Division 1 title.