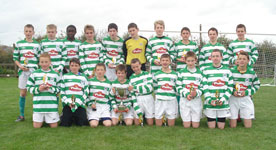 Nathan Clancy and Mikey Morrissey played a major role in helping the Limerick Desmond Kennedy U-13 team lift the Liam O’Donovan Memorial cup in Charleville on Monday October 25th last. In the opening game they recorded a comprehensive 5-0 win against North Tipperary SL with Nathan Clancy getting the ball rolling when he chipped the keeper early in the first half. Further goals from Liam McCarthan (2), Van and Sean McSweeney sent them into the final against The Limerick County SL.

The Desmond lads won a hard fought final game which was somewhat ruined by a strong wind with the only goal of the game scored by Ballingarrys Nathan Clancy. Vincent O’Donovan, brother of the late Liam presented LDSL captain Padraig O’Connor with the cup following the game.