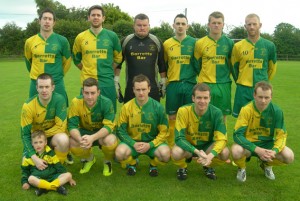 Ballingarry will feel their chance came and went during the first game as NCW claimed the Desmond Cup with a goal in either half in the replay on Saturday last (July 5th 2013). Ballingarry never reached the heights of the first day and once they fell behind one felt it was going to be NCWs day.

Kevin Forde did have the ball in the winners net in the first minute of the second half but it was ruled off side. This was the nearest Ballingarry came during an entertaining game.
Team: Kenrick; Healy; M Clancy; Fitzgerald (capt); C Kiely; F Kiely; O’Grady (O’Reilly); Moore; Forde; Alymer (D Clancy); Kelly.