Ballingarry AFC & Hibernians FC continued to foster links between the two clubs when on January 13th, 2023, twelve members of Ballingarry AFC made the trip to Edinburgh to continue the connection between the two clubs which is linked through Canon Edward Joseph Hannan, a Ballingarry native who helped form Hibernian FC in 1875. The trip began with a visit to the Hibernian Training Centre on Thursday afternoon. The academy head coach Steve Kean gave fantastic access to the facilities and involve the Ballingarry coaches in every aspect of the training facility. One of the Ballingarry AFC youth players Eoin Lynch was allowed take part in the training session with U18 squad. 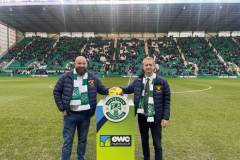 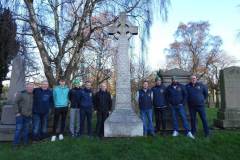 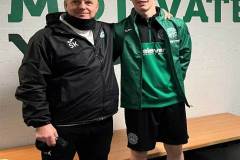 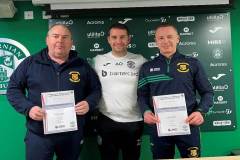 On Friday the St. Patrick’s Hibs supporters branch gave a tour of the sites associated with the Hibs founder Canon Edward Joseph Hannon. This included Grange cemetery where the Canon is buried and St. Patrick’s church where he was based for 30 years. The evening ended with a gathering at the Hibernian’s supporters club.

Saturday began with an air of excitement as the group were guests of Hibernian Director Stephen Dunn for the home game versus Dundee United. The day began with a tour of the Easter Road stadium including dressing rooms, media rooms and even home dug out. The highlight of the day was the presentation of the match ball by Ballingarry AFC President John Cronin along with Chairman David O’Hanlon in front of an attendance of 18,676 on the Easter Road pitch. The game itself was very enjoyable and when Kevin Nesbit scored a deserved equaliser in the 92nd minute, Easter Road was rocking.

Both clubs have made commitments to keep the strong connections between each other going into the future. And with the 150th anniversary of the founding of Hibs coming up in 2025, there will be a lot more to come from the Ballingarry and Hibs connections