Our impressive 19s were denied a season where they were hoping to go after all trophies on offer but were denied by the covid pandemic. They showed what they were capable of in the summer tournament by winning all 6 games, scoring 43 goals and only conceding 4.

Last nights result was extremely impressive putting 13 past a very good footballing Kildimo side who were young and will be ones to watch in the future. It was a slow start for both sides, who were trying to scope their opposition out but it was Ballingarry who struck first with a lovely finish by Lee Madigan. Another goal 2 mins later by the head of Eoin Lynch looked to set Ballingarry on their way but when Kildimo pulled one back on 40 mins Ballingarry knew they had to go up a gear to win this game. Up a gear (or two) they did and 2 more goals before half time by Paudie Murphy and Cian McGoey put one hand on the trophy for the green and gold.

The second half Ballingarry had the luxury of introducing very strong players off the bench and this proved to be the difference between the two teams in the second half. Three substitutes scored 6 goals in the second half, a hat trick by David Geary, two from Cathal McMahon and one from Cian O Carroll. Another from McGoey and two from Mike Molloy finished off the evening of impressive passing and finishing in style. 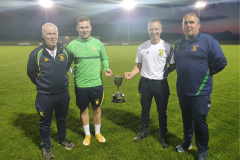 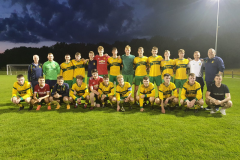 With only 4 over age for next years youths and more young talent coming through it makes light reading for the future. 🟡🟢🏆