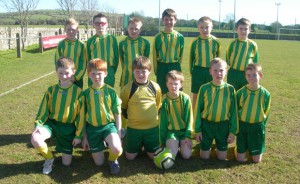 Ballingarry Under 12 B team

Ballingarrys last game of the season ended in defeat and so went any chance they had of winning the title. They are guaranteed at least a runners up play off and considering this is the clubs B team it must be viewed a major achievement.

A great day for the ladies as they made up some way for the disappointment of losing both the league playoff and Desmond cup to Abbeyfeale.