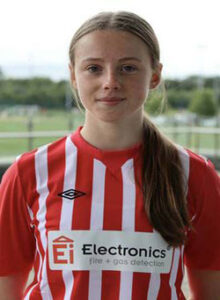 Ballingarry AFC would like to congratulate former player and now league of Ireland player with Treaty United U17 Nicole McNamara who is invited to the U17 National Assessment day in the AUL on 4th October. Ireland U17 team is managed by James Scott who also attended Treaty United v DLR Waves yesterday in Ballingarry where Treaty came away with all 3 points on a winning score line of 2 nil, with Nicole scoring the second with a 40yrd screamer, wishing you all the best Nicole from all in Ballingarry AFC