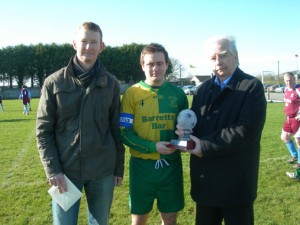 Pride of place over the weekend must surely go to one Colm Kiely who set a new club appearance record with his 364th competitive game for the club in the 6-0 trouncing of Broadford United B in the first round of the Desmond Cup on Sunday (24-2-13). Kiely, who since his debut in September 1998 has featured in every season since was given a guard of honour by both teams as he entered the pitch. Made captain for the day he was presented with a commemorative trophy by club President Moss Doody while the man whose record he broke, James Higgins, was also in attendance to congratulate the new record holder.

Kiely has picked every major domestic with the club including the Premier title, two Desmond cups, three division 1 titles and two division 1 league cups. He has also won the clubs Player of the Year award on two occasions while he has also captained the side. He has proved a credit to the club having never been sent off while collecting a handful of yellow cards. As always he was a rock during this game that Ballingarry cruised through, making up for the Desmond cup embarrassment at the same stage against the same opponents last term and a fitting way to honour one of the clubs great players.

Ballingarry could have been out of sight by the break missing countless openings. As it happened they went in at the break 2 up thanks to Padraig O’Reilly and Kevin Forde. Denis Kelly got their third shortly after the restart before Francis Kiely hit the fourth form the spot following a foul on Dean Clancy. Eoin Ryan got his name on the score sheet before Kevin Forde with his second rounded off the rout.

In other news the B team were beaten 3-0 at Athea United in the division 3 league cup semi final second leg to go out 7-2 on aggregate. The 14s lost their grip on the cup they won for the first time last season when NCW Rovers beat them 1-0 while the 10 B side went under 3-2 at Ferry Rangers.