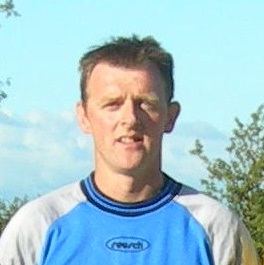 Former team mates, managers and committee members of Ballingarry AFC who played and worked with Gerard O’Connor were much saddened by the news of his death on Thursday July 16th 2015 last following illness.

Gerard O’Connor signed for Ballingarry AFC at the start of season 1995/96 making his debut in goal in the 0-0 Premier Division draw against Glantine Rovers. He would continue as Ballingarrys first choice goalkeeper for the next four seasons where he proved himself a most accomplished player indeed for the club.

His attitude towards preparation for games both during training and match day made him stand out as a shining example to those around him and ensured he was held in the highest regard by his team mates. He was voted the clubs Player of the Year during season 1996/97 and by the time he played his last game for the club on May 16th 1999 he had amassed a total of 99 appearances.

He was very much a gentleman who will be sadly missed by the many friends he made through his love of sport. The club would like to express its deepest sympathy to his wife Margo a former player with the clubs ladies team, sons Aaron and Josh both of who played and play for Ballingarry AFC and his family and friends.

May he rest in peace.