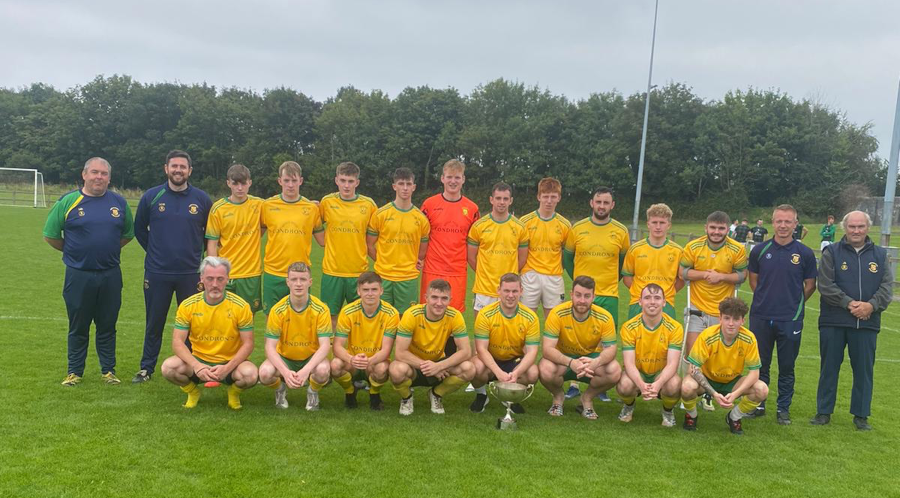 Our A team came out on the right side of a very tough fixture this morning against a very good and physical Glin Rovers side. They join our 19s and B team in winning their tournaments in what has been a very good pre season for the club.

The first half was a close encounter with neither side getting a hold of possession or working either keeper. Both sides resorted to a ball over the top that was handled comfortably by both defences.

The second half was a more lively affair as both Ballingarry and Glin tried to created more chances to find that all important goal. Ballingarry’s young side grew into the game the longer it went on and chances started to come our way. Mike Molloy forced a brilliant save out of the Glin keeper from a free kick and and it was a Mike Molloy short corner to Lee Madigan who’s curling cross found the head of Aaron Smith who headed past the Glin net minder. Ballingarry sat back to defend what they had as Glin piled on the pressure from corners and free kicks. The pressure took its toll 3 mins from time when the Glin centre back headed against the post from a free kick delivery and he was able to knock the rebound past goal keeper Craig McInness. For the second time in two games we were going to penalties.

The penalties again were expertly dispatched by Ballingarry and Craig McInness saved one by brilliantly diving down to his left to deny Glin. Penalties were scored by: Kevin Forde, Declan Nash, Aaron Smith and Mike Molloy.

Well done to all involved and the focus now turns to next weeks first competitive game a Munster Junior Cup tie at home to Glin. 🟢🟡🏆🏆🏆